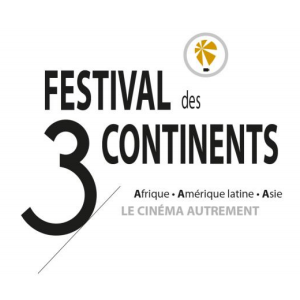 Prizes Each prize is given to the director(s):

- The Montgolfière d'Or, endowed with €6,000 by the Festival des 3 Continents and the City of Nantes.

- The Montgolfière d’Argent, endowed with €4,000 by the Festival des 3 Continents and the Loire Atlantique Departmental Council.

- The Young Jury Award, endowed with €3,000 by the Damier, foundation of the Brémond group.

SUBMISSION REQUIREMENTS Directors must originate or be nationals of an African, Latin American or Asian country. Films must be at least 45 minutes in length. Films submitted for the International Competition must have been completed after 1st November 2020 and be unreleased in France (no programming in Festivals, commercial screening, no TV or VoD broadcasting) before the opening of the Festival des 3 Continents. The 43rd edition will happen from 19 to 28 November 2021. EDITORIAL LINE The Festival des 3 Continents accepts all fiction and all documentary films, whatever the subject, type or form. The Festival does not select news programs, documentaries or reports of a journalistic nature, promotional or corporate films. Particular attention is paid to films seeking distribution in France. PRINT, SCREENING EQUIPMENT & SUBTITLING The print of the selected film must be in 35mm or 16mm format with optical sound or in digital form (preferably DCP 2K, HD PRO RES or Blu-ray). The Festival gives preference to the format used in the original screening of the finished work. Only copies in perfect condition will be accepted. Selected films are screened in the original language with French subtitles. For films either subtitled in English or with no subtitles, the Festival will provide subtitling from a list of dialogues in French, English or the original language provided by the sales agent, the producer or the rights holder of the film. Prints of the films in the International Competition must be available until the last day of the Festival or, in case this applies, for the “reprise” of the awarded films. The films are made available to the Festival free of charge. The Festival will cover the cost both ways of the shipment of the prints, except when the film is shipped at the end of the Festival to a destination different from that of origin, in which case the Festival will cover the cost of shipment only to Nantes. The Festival will cover the insurance costs of the prints during transport and their storage during the Festival. In case of loss or damage during this period, the responsibility of the Festival will be limited to the replacement value of the print in accordance with the rates applicable in the country of origin DOCUMENTATION Documentation must be submitted to the Festival offices for publication in the catalogue. In the absence of instructions to the contrary, the information given on the film’s registration form (at the moment of preselection) is reproduced in the catalogue and the other communication material of the Festival. Submitted photographs, in particular for the catalogue and other publications of the Festival, may be used free of charge by the media, in any of the Festival’s promotional documents and on its website. Must also be supplied, with express permission from the producer and free of charge, a HD file with a 2 to 3 min extract of the film (without watermark), for television broadcasting and also possibly on the Festival website, during and after the Festival, uniquely for promotion of the Festival des 3 Continents PROMOTION During commercial screening of a film, the producer and director agree to mention in the credits and all advertising and promotional material the words « In Competition at the Festival des 3 Continents – Nantes » and in the case of an award-winning film, full wording of the prize awarded, followed by the year in which the film was presented at the Festival. Films participating in the Festival represent only their director and / or their producer and / or their future distributor to whom are implicitly destined the distinctions mentioned under the heading « Awards ». These films, presented to the public by the Festival and under the responsibility of the organizing association, cannot consequently be considered as officially committing or representing towards the Festival the governments or states of whom the directors or producers are nationals. The 3 CONTINENTS Association, organizer of the Festival des 3 Continents, has the power to settle all cases not provided for in the present regulations. It reserves the right to interrupt, suppress or postpone the event or to modify these regulations at any time, depending on its operating requirements. In this case, no compensation of any kind will be granted to participants. The present document is drawn up in French and English. In case of dispute concerning interpretation of the text, the French version will prevail. Participation in the Festival des 3 Continents implies acceptance of the afore mentioned regulations.